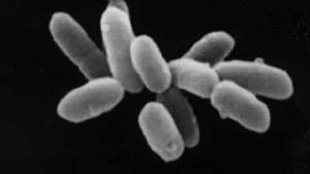 WIKIMEDIA, NASAHaloarchaea, bacteria adapted to extreme salinity, have previously been shown to readily engage in horizontal gene transfer between species. But research on the isolated population of bacterial residents in Antarctica’s extremely salty and cold Deep Lake, published online this week (September 30) in the Proceedings of the National Academy of Sciences, demonstrated that the region’s haloarchaea exchange DNA more frequently, in larger amounts, and among different genera more often than any previously studied population.

The team behind these findings was led by Professor Rick Cavicchioli of The University of New South Wales in Sydney and included researchers from Australia and the U.S. Department of Energy Joint Genome Institute. The researchers first sampled the water of Deep Lake at different depths and then sequenced the genomes of the resident bacteria. They found that four haloarchaea isolates, each representative of a different genus, comprised roughly 72 percent of...

The frequent exchange of genes coupled with the extremely slow growth of the bacteria—which divide, on average, a mere six times per year—could be expected to homogenize Deep Lake’s bacterial population, but the researchers did not find evidence that diversity had decreased. “What is also remarkable is that in addition to all the promiscuous gene swapping, the dominant members of the community retain their own identity as a species, and coexist with others, exploiting different niches without impinging on each other,” wrote Cavicchioli at The Conversation.

It is still unknown whether other communities of cold-living haloarchaea swap DNA as frequently as the haloarchaea in Deep Lake. “This is the only cold hypersaline system that has been studied, so we don’t know about others,” Cavicchioli wrote in an e-mail to Ars Technica. “On my coming expedition (leaving in a few weeks) we will take samples from other lakes that might have similar communities,” he added.