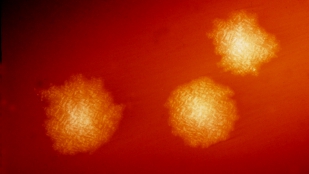 C. difficile cultures
Wikimedia, CDC, HoldemanClostridium difficile is a common disease in hospitals and nursing homes and causes some 14,000 deaths each year in the United States. The disease can be treated with antibiotics, but the bacteria produce spores that resist common disinfection techniques, resulting in a high rate of re-infection. (See “Wrestling with Recurrent Infections,” The Scientist, May 2011, for an overview of C. difficile infections and treatment options.) Now, researchers from the Wellcome Trust Sanger Institute have isolated a combination of six other bacteria species that successfully fight C. difficile infections in mice, potentially paving the way toward standardized therapy, according to a report in PLOS Pathology last week (October 25).

The only successful treatment to date has been fecal therapy, which involves the transfer of fecal material from a healthy individual directly into the intestines of an infected patient.  However, the treatment is...

“Fecal transplantation is viewed as an alternative treatment, but it is not widely used because of the risk of introducing harmful pathogens as well as general patient aversion,” lead author Gordon Dougan from the Wellcome Trust Sanger Institute, in the United Kingdom told Genetic Engineering and Biotechnology News. “This model encapsulates some of the features of fecal therapy and acts as a basis to develop standardized treatment mixture.”