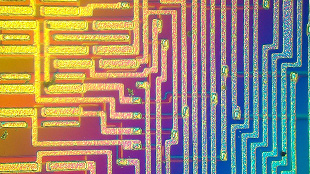 Scientists in the United Kingdom and Japan have hijacked natural manufacturing processes in the acquatic bacterium Magnetospirilllum magneticum to produce tiny magnets and electrical wires that could one day be used to build nanoscale computer microchips.

"We are quickly reaching the limits of traditional electronic manufacturing as computer components get smaller," lead researcher Sarah Staniland of the University of Leeds told BBC News. Bacteria could take over where current machines are struggling.

The researchers also built quantum dots-based nanotubes encased by lipids. Such nanotubes could one day serve as the electrical wiring with the capability of transferring information.

"Various tiny wires have been already developed all over the world, but the biocompatibility is still problematic," Masayoshi Tanaka, a researcher at Tokyo University of Agriculture and Technology who was also involved with the study, told the BBC. "The fabricated nano-wires in this study were covered with components of cell membrane, so theoretically they are highly biocompatible."