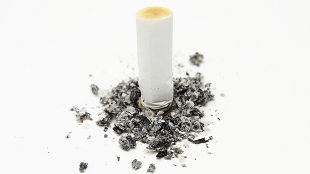 FLICKR, MATT TROSTLEAvailable treatments for quitting smoking fail in the vast majority of those who try them, but a new study points to a bacterial enzyme that may prove more successful. Pseudomonas putida, a soil bacterium first isolated from a tobacco field, gets all its carbon and nitrogen by consuming nicotine. And a P. putida enzyme called NicA2 is responsible for breaking down nicotine, according to a study published last week (August 6) in the Journal of the American Chemical Society.

“The bacterium is like a little Pac-Man. It goes along and eats nicotine,” coauthor Kim Janda of the Scripps Research Institute in La Jolla, California, said in a press release. “Our research is in the early phase of drug development process, but the study tells us the enzyme has the right properties to eventually become a successful therapeutic.” If NicA2 can degrade nicotine before it...

Sure enough, when the researchers spiked mouse serum with a dose of nicotine equivalent to one cigarette, then added NicA2 to the mix, the enzyme cut nicotine’s half-life from more than two hours to less than 15 minutes. Additional experiments demonstrated that NicA2 is remarkably stable, even at body temperature, and its degradation of nicotine produced no toxic metabolites—all good signs for a potential therapeutic.

“Hopefully we can improve its serum stability with our future studies so that a single injection may last up to a month,” first author Song Xue, a Scripps graduate student, said in the release.