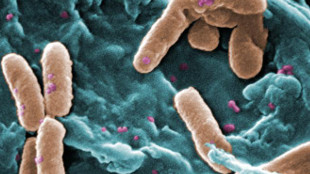 FLICKR, MICROBE WORLDSomewhat ironically, a type of pathogenic bacteria that have evolved to swarm together more swiftly are actually less efficient when it comes to forming biofilms, scientists have found. Compared with planktonic microbes, which float along in aquatic environments, bacteria conglomerated on a surface within a biofilm show markedly different phenotypes. In a study published August 15 in Cell Reports, Joao Xavier from the Memorial Sloan-Kettering Cancer Center in New York and his colleagues show that Pseudomonas aeruginosa is subject to an evolutionary trade-off between motility and effective biofilm formation.

“We were surprised that the hyperswarmers were worse at forming biofilms than the wild type,” Xavier told New Scientist. “Our data suggests that they do attach [to one another] but then have a much higher probability of detaching before they start growing and reproducing at the surface. The most likely reason for their early detachment is...

In an experimental evolution setup, Xavier’s team subjected P. aeruginosa to repeated rounds of swarming. Through parallel evolution, the bacteria eventually converged toward a hyperswarmer phenotype. In bacterial populations that evolved independently, the researchers found that this phenotype was caused by parallel point mutations in FleN, a flagellar synthesis regulator.

“Although hyperswarmers outcompete the ancestral strain in swarming competitions, they are strongly outcompeted in biofilm formation, which is an essential trait for P. aeruginosa in environmental and clinical settings,” the researchers wrote in their paper.

Ordinarily, P. aeruginosa invade people with weakened immune systems, forming films that make them tough to nix with antibiotics. As New Scientist notes, “Figuring out a way to prevent the bacteria from forming biofilms could make infections easier to treat.”