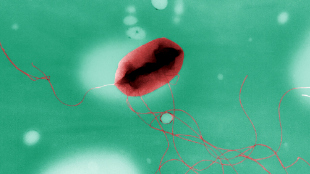 WIKIMEDIA, E.H. WHITEScientists have taken advantage of bacteria’s natural ability to transport molecules into other cells to create a custom protein-delivery service that’s nonpathogenic. Such a tailored system could, in theory, serve as a drug delivery vehicle.

Previous attempts relied upon pathogenic bacteria, which use this delivery system to inject effectors—proteins that usurp mammalian cell functions to benefit the microbes. To get around the potentially problematic use of hazardous bacteria, Cammie Lesser of Massachusetts General Hospital and her colleagues grabbed the genetic information for a secretion system from Shigella flexneri and stuck it into the E. coli genome.

The system worked. Not only did these nanoscale taxis drop off effectors in mammalian cells, but, as a proof of concept, they also shuttled a gene of interest, the transcription factor MyoD. “On the basis of our ability to generate variants of several mammalian proteins that are recognized as secreted...

According to Chemical & Engineering News, “Lesser and her colleagues are taking the next step toward therapies. Currently they are engineering bacteria that can deliver anti-inflammatory proteins to treat inflammatory bowel disease.”