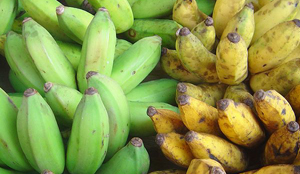 Black leaf streak disease is a debilitating infection that for the last 50 years has been attacking plantain and banana plants, delaying harvest and affecting fruit quality by impeding leaf photosynthesis and causing fruit to ripen prematurely. Mycosphaerella fijiensis, the fungus responsible for black leaf streak disease, emerged in the 1960s, and now has a global reach, affecting all continents where bananas are grown.

And unfortunately, black leaf streak is not the only fungal disease plaguing banana plants worldwide. The Race 1 strain of the fungus Fusarium oxysporum f. sp. Cubense, the cause of Panama disease, took out a vast chunk of the world’s banana crop in the first half of the 20th century, and a new strain, called Tropical Race 4, now appears to be threatening the popular fruit.