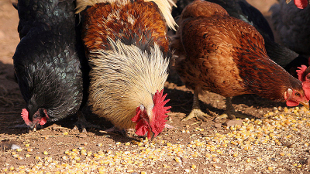 Fluoroquinolones—a class of broad spectrum antibiotics that was banned from use in US poultry production by the US Food and Drug Administration in 2005—may still be in use illegally, according to a study published March 21 in Environmental Science & Technology. Researchers at the Johns Hopkins Bloomberg School of Public Health and Arizona State University found residues of the drugs in 8 of 12 samples of feather meal, a common byproduct of the poultry processing industry. The findings suggest that the animals were given fluoroquinolones prior to their slaughter and sale.

“The discovery of certain antibiotics in feather meal strongly suggests the continued use of these drugs, despite the ban put in place in 2005 by the FDA,” lead author David Love, a microbiologist with Johns Hopkins Center for a Livable Future, said in a press release. “The public health community has long been frustrated...

Antibiotic use in farmed animals is a concern because it may be fueling drug resistance to human infectious diseases. “Particularly worrisome is the continued use in animals of antibiotics that are close structural relatives of those that are used in human medicine,” wrote Bonnie M. Marshall and Stuart B. Levy of Tufts University in this month’s Critic At Large column. “It is feared that, in time, these drugs will lose potency as bacteria express ‘cross-resistance’ to the related drugs.”