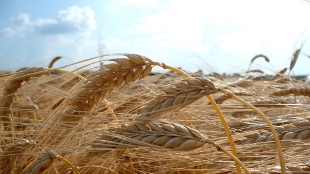 WIKIMEDIA, CARPORTBefore 3,600 years ago, humankind just couldn’t hack it above 2,500 meters (8,202 feet). It was just too cold and frosty for most grain crops to grow at that elevation. Then came barley. Once people started growing the cold-tolerant cereal instead of the more-sensitive staple millet, populations shifted up the Tibetan Plateau to settle agricultural lands as high as 3,400 meters above sea level, according to a team of archaeologists. Their work was published in Science last week (November 20).

The researchers reviewed about 40 years worth of data and radiocarbon dated more than 60 samples of charred grains. “Barley agriculture could provide people [with] sustained food supplies even during winter,” the paper’s three lead authors, Fahu Chen, Guanghui Dong, and Dongju Zhang of Lanzhou University in China, wrote in an e-mail to Science. “Barley and wheat were first domesticated in [the Fertile Crescent] in West Asia...

The authors suggested that even though nomadic hunter-gatherers frequented the Tibetan Plateau around 10,000 years ago, barley and perhaps wheat—certain varieties of which are also cold tolerant—made agriculture and year-round settlements feasible in the harsh environment. They added that farmers who were crowding Asia’s Yellow River valley region started moving higher once the crops became available. “Only after 3,600 years ago, when frost-hardy and cold-tolerant barley and wheat—and perhaps sheep, too—arrived, could people continue to move higher,” the researchers wrote in their paper.