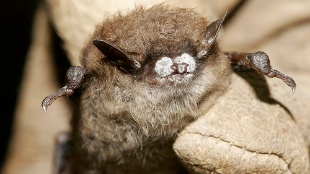 In 2006, researchers in New York state documented a strange phenomenon: bats, all with white noses, were dropping dead. In the intervening 5 years, scientists have worked feverishly to figure out what was killing the bats, and identified a single fungus as the cause, but they have yet to find a treatment for the pathogen.

And the news seems to only get worse. Yesterday (January 18), the US Fish and Wildlife Service announced that, according to their recent figures, at least 5.7 million to 6.7 million bats have been killed by white nose syndrome so far in North America.

“This startling new information illustrates the severity of the threat that white-nose syndrome poses for bats, as well as the scope of the problem facing our nation,” said Fish and Wildlife Service Director Dan Ashe in the press release. “We are working closely with our...

Compiling the new figure was no small feat. The pathogen hit suddenly and has since spread to 16 US states and four Canadian provinces, affecting six species. While biologists have extensive population statistics on endangered bat species, data on the common species hit hard by the fungus, such as the little brown bat, are harder to come by.