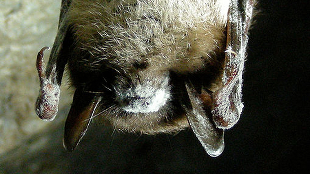 A little brown bat with white-nose syndrome in Greeley Mine, VermontWIKIMEDIA, US FISH AND WILFLIFE SERVICEThe fungus that causes white-nose syndrome (WNS), a disease that has already killed millions of bats in the United States, has been detected as far west as Arkansas, reported BBC News. The fungus, Geomyces destructans, was found in two caves in the state, but so far there is no sign of the disease in the bat population.

“These are pretty far west occurrences,” Ann Froschauer of the US Fish and Wildlife Service told the BBC. “We do have one potential site further west in western Oklahoma, but these latest cases are the most western confirmed cases to date.”

WNS was first discovered in a cave in New York State in 2006 and has since swept through 22 other states and five Canadian provinces, killing almost 7 million bats along the...

There is currently no vaccine to protect uninfected bats. For the moment, researchers and officials are focused on slowing the spread of the disease. For example, some researchers are looking into the possibility of using abandoned military bunkers as sterile overwintering sites.