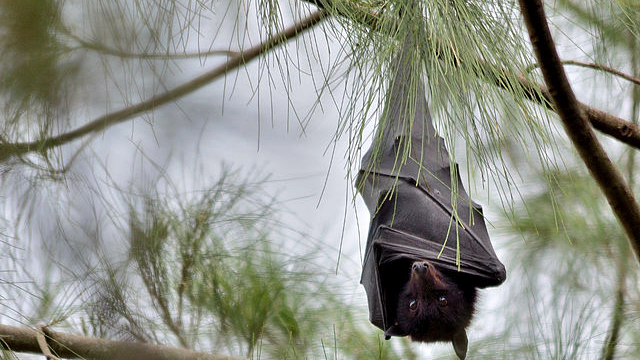 WIKIMEDIA, JAMES NILANDBats have a lot of viruses floating about in their bodies, but they don’t get sick like humans do. That could be because bats fly.

“We were interested [in] why and how bats’ immune systems could deal with so many deadly viruses,” Peng Zhou, a virologist at Wuhan Institute of Virology in China, tells The BBC.

Zhou and his colleagues reported yesterday (February 22) in Cell Host & Microbe that bats may have evolved to dampen certain immune pathways to have milder responses to viruses. The team focused on the stimulator of interferon genes, or STING, pathway, which plays a role in antiviral immunity by screening cells for free-floating DNA. In non-flying mammals, free-floating DNA is minimal, so if STING sensor molecules detect it, they send a flood of interferons to the cells.

Flying, however, takes effort and, in turn, releases a lot of free-floating DNA into bats’...

“Viral infection is the compromise that the bats have made for flight,” Kate Stacey, an immunologist at University of Queensland who was not involved in the work, tells COSMOS.

John Mackenzie of Curtin University in Perth, Western Australia, who also didn’t take part in the study, tells New Scientist that researchers need to “learn how the bats remain well and unaffected” because the viruses they carry could spark new global pandemics.

Still, some researchers have questions about the new results. Victor DeFilippis of the Oregon Health and Science University tells The BBC that it’s not clear whether scientists can “draw broad conclusions that a dampened Sting-dependent interferon response is allowing bats to harbor a large array of viruses.”

The research is not a “smoking-gun” showing that STING is a “direct or indirect factor in increased viral occupation of bat species,” he says.