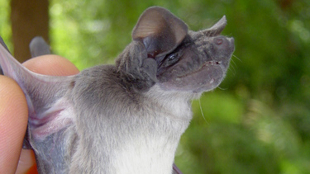 The Angolan free-tailed bat (Mops condylurus)JAKOB FAHRAlthough researchers have not yet definitively identified the source of the Ebola virus that has killed nearly 8,000 people and sickened many more in West Africa this year, a large international team of scientists this week (December 30) suggested that the epidemic may have jumped from bats to humans near a small Guinean village. This past April, Fabian Leendertz, an epidemiologist at the Robert Koch Institute in Berlin, led researchers in a search for animals harboring Ebola in southeastern Guinea, the country that reported some of the first cases of the current epidemic. The researchers did not find populations of wild animals dying from Ebola, as often occurs in conjunction with outbreaks in humans, and none of the 169 bats they sampled turned up positive for the virus. But the team did hear of a hollow Cola tree that harbored...

While the results contain no direct evidence of bats infected with Ebola near Meliandou (the confirmed epicenter of the Ebola outbreak), Leendertz suggested that the toddler could have picked up the virus from bats by playing in or near the Cola tree, which was burnt before his team had a chance to investigate it. “There must have been thousands of bats in there,” he told Science. “That is more exposure than you can get by hunting individual bats.”

Wildlife biologist Peter Walsh of the University of Cambridge in the U.K. told Science these latest results implicating bats are interesting, but that the evidence is not robust enough to lay the blame for starting the Ebola epidemic. “It is suggestive, but it certainly doesn’t rise to a ‘smoking gun’ level,” he said. Leendertz agreed that he was not fully satisfied with his study, telling Scientific American that, “It’s probably the best we can get, but we are very unhappy with the data.”

Leendertz stressed in October that even if bats are fingered as the reservoir for the strain of Ebola causing the current outbreak, care must be taken to ensure that their conservation is assured. “It’s not a solution to kill the animals,” he said. “It’s about living with the animals.”

Meanwhile, the search for the animal reservoir continues in Africa, and piecing together how exactly the virus spread to humans could be essential to combating the ongoing outbreak. “I think it will be possible to prevent [Ebola cases] from happening,” Gary Kobinger, head of the special pathogens program at the Public Health Agency of Canada, told Scientific American. But pinning down the virus’s jump from animal to human is no trivial task. “You are looking for this one rare event and trying to understand this one rare event in context and put together the circumstances that lead to this,” Kobinger added. “It’s hard to predict because you have to synchronize it with an outbreak.”