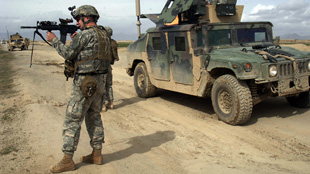 Head injuries resulting from blast trauma during military combat may lead to chronic traumatic encephalopathy (CTE), a neurodegenerative disease recently diagnosed in a number of former athletes. According to a new study published in Science Translational Medicine yesterday (May 16), brain autopsies of four deceased US veterans revealed the telltale signs of CTE: damage to axons and tangles of the protein tau, a protein closely linked to dementia and other neurodegenerative diseases. The soldiers, whose ages ranged between 22 and 45, had also all experienced cognitive, emotional, and impulse-control problems prior to their deaths. But unlike the CTE pathology described in American football players and wrestlers, which is primarily observed in the brain’s frontal lobes, the damage to the veterans’ brains was more evenly distributed.

Whether the trauma and the behavioral problems resulted from head injuries suffered during their active military service, however, remains unclear,...

"Whether there is a relationship between CTE and blast … is definitely a question that we feel needs to be answered," Colonel Dallas Hack, who researches trauma for the US Armed Forces, told ScienceNow.

The study also examined mice exposed to blasts, and found evidence that there’s a similar CTE pathology to that resulting from other types of head injuries. Two weeks after mice were exposed to blasts, for example, researchers observed brain inflammation and damage to axons and capillaries, as well as an accumulation of chemically modified tau proteins. "That would mean we're looking at the same type of injury in Afghanistan that we're looking at on the football field or in a car accident," David Hovda, a neuroscientist at the University of California, Los Angeles, told ScienceNow.