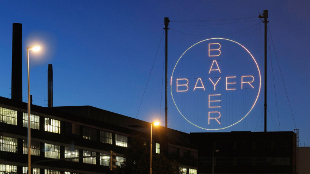 BAYER AGBayer has entered a partnership with CRISPR Therapeutics, a company cofounded by CRISPR engineer Emmanuelle Charpentier of Berlin’s Max Planck Institute for Infection Biology, the parties announced yesterday in a press release (December 21). The pharma giant will invest a minimum of $300 million in the partnership over the next five years to fund research and development. Bayer will also purchase a minority stake in CRISPR Therapeutics for $35 million.

“The [joint venture] and the Bayer investment are game-changing for our business,” Rodger Novak, CRISPR Therapeutics cofounder and CEO, said in the press release. CRISPR Therapeutics will keep a 50 percent ownership in the high-risk, high-reward areas of blood disorders, blindness, and congenital heart diseases, he added. Beyond that, CRISPR Therapeutics gets exclusive rights to products for human use, and Bayer gets rights to any products intended for nonhuman use, such as in agriculture.

Novak told Business Insider that CRISPR Therapeutics is looking to follow the same timeline as Editas, another CRISPR company founded by CRISPR pioneers Jennifer Doudna and Feng Zhang, which plans to start testing CRISPR-fueled therapies in people by 2017.

Correction (December 22): The subheadline in this article has been corrected to fix a typo: Bayer is conributing $335 million to this deal, not $353 million (as was written). The Scientist regrets the error.