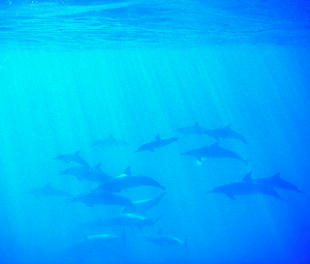 FLICKR, STEVE JURVETSONDolphins caught on camera during the filming of a new BBC TV series appear to use a toxic puffer fish to get high. The crew observed the marine mammals- passing the fish between them in waters near Mozambique on the southeast coast of Africa, nudging the fish with their rostrums, and seemingly slipping into “a trance-like state” as the fish’s toxin leaked into the water, the Daily Mail reported. “At one point the dolphins are seen floating just underneath the water’s surface, apparently mesmerised by their own reflections.”

The scientists and film crew working on the movie were just as captivated, watching as the dolphins spent up to a half an hour playing with the puffer. According to zoologist and series producer Rob Pilley, this is the first time this behavior has been captured on film.

“We saw the dolphins handle the puffers with kid gloves, very...

The upcoming two-part series— Dolphins: Spy in the Pod,which airs tonight on BBC1—also features moments such as a “megapod” of thousands of dolphins, and a mother dolphin teaching her calf to hunt. In total, some 900 hours of film were captured in oceans around the world, from the Americas to South Africa and Australia.