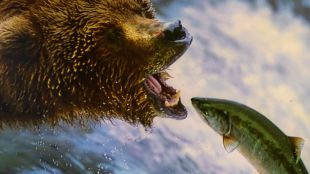 PIXABAY, WERNER22BRIGITTEA scientist working for Amgen faked data in a study on how grizzly bears avoid developing long-term metabolic problems, despite gaining weight and ceasing activity during hibernation. Upon learning of the misconduct, the authors, including several based at the University of Idaho and Washington State University (WSU), this week (September 1) retracted their 2014 Cell Metabolism study.

The offending author has not been named. The Wall Street Journal pointed out that one of the authors, Kevin Corbit of Amgen, was fired for data manipulation. But Corbit said his dismissal was tied to a separate incident, and that he stands by the grizzly bear study findings, which showed insulin sensitivity reversed course during the year. In the fall, insulin signaling remained intact and bears gained weight. Then,...

Study coauthor Lynne Nelson of WSU said her team is now working to replicate the study. “We did nothing wrong, and we’re still going to pursue the hibernation physiology in bears because we think it’s an important thing to do,” she told the Wall Street Journal.