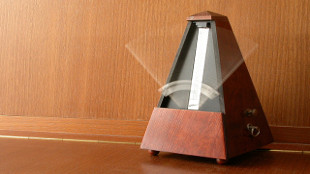 People with “beat-deafness,” who struggle to clap or tap their feet in time with music, may owe their rhythmic dysfunction to a discrepancy between the way their brains perceive sound and control movement, according to researchers at McGill University and the University of Montreal.

The team of Canadian scientists compared the rhythmic abilities of two beat-deaf people and 32 control participants. Without hearing an external beat, all of the participants could keep a constant internal pulse. But while the control subjects could adapt to the tempo changes of a clicking metronome, the beat-deaf individuals failed to adjust the timing of their taps. The results, reported yesterday (November 10) in the Philosophical Transactions of the Royal Society B, show that beat-deafness is not related to a motor deficit.

“The types of mistakes that beat-deaf individuals made indicated deficits in biological rhythms, including the natural frequencies or rates at...

Palmer told New York magazine that beat-deafness is a rare condition—in the study, the control subjects showed variable abilities to react to tempo changes: “Many people think they have more severe problems than they do when they come in for testing,” she said. Palmer and her colleagues speculate that beat-deaf people may adapt differently to the rhythms of conversation and other group activities.