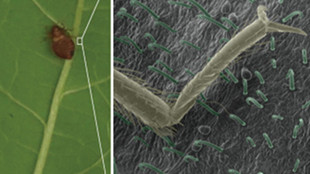 Bed bugs have a fearsome enemy: the bean plant. Traditionally, Eastern Europeans filled their bedrooms with bean plant leaves, which trap bed bugs with tiny hook-like hairs, then burned the leaves the next morning. Inspired by this custom, scientists are studying bean plants’ ability to deter bed bugs in modern-day societies, according to a study published yesterday (April 10) in the Journal of the Royal Society Interface.

University of California, Irvine, biologist Catherine Loudon and colleagues looked at bed bugs trapped on bean plants using video and an electron microscope, and found that the leaves were covered in small hooked hairs, which pierced the thin areas in the insects’ carapaces near their joints. On average, the bugs were trapped after just six steps on the plants.

“If someone had suggested to me that impaling insects with little tiny hooks...

The leaves’ success inspired the scientists to try to create synthetic bed bug traps modeled after the bean plant leaves using epoxies. But the synthetic traps did not work as well as the natural ones: it took the bugs 39 steps on average to get stuck. Even then, the synthetic hairs did not pierce the bugs’ carapaces, and they usually escaped. The scientists are now refining their design to improve the device’s performance.