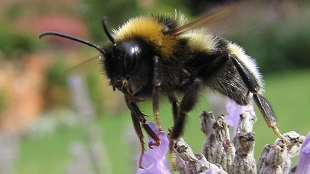 WIKIMEDIA, SCRUMPYBOYWhen a toxin found in bee venom is bound to nanoparticles, it can pop the outer coating of HIV particles without harming normal cells, according to an in vitro study published in the current issue of Antiviral Therapy.

The nanoparticles were designed to be delivered as a vaginal gel to help prevent HIV infection before it starts. The particles are coated with the bee venom toxin melittin, which strips HIV of its outer envelope on contact. Melittin is normally also toxic to human cells, but the particles are designed with “bumpers” that extend from their surface and prevent the melittin from coming in direct contact with cells. These bumpers pose no  barrier to the virus, which is much smaller than a cell, and smaller than the nanoparticle itself.

“We are attacking an inherent physical property of HIV,” first author Joshua Hood said in a press release. “Theoretically, there isn’t any way for the virus to adapt to that. The virus has to have a protective coat, a double-layered membrane that covers the virus.”