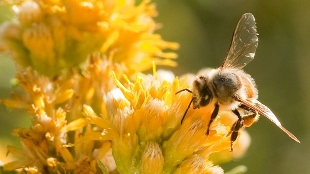 When older bees that are in charge of foraging for the colony instead stay home to perform some of the social tasks required inside the nest, their brains change, essentially reverting to a molecular structure typical of younger bees, according to new research published in Experimental Gerontology.

“We knew from previous research that when bees stay in the nest and take care of larvae…they remain mentally competent for as long as we observe them,” coauthor Gro Amdam of Arizona State University (ASU) said in a press release. “However, after a period of nursing, bees fly out gathering food and begin aging very quickly…. We wanted to find out if there was plasticity in this aging pattern.”

Amdam and colleagues at ASU and the Norwegian University of Life Sciences investigated this question by removing younger nurse bees from the nest. When the older, foraging bees returned to...

Comparing the brains of the new caretakers with those that continued foraging, the researchers found increased level of the protein Prx6, which is known to protect against dementia in humans, as well as increased levels of a chaperone protein that protects other cellular proteins during times of stress.

The results suggest that social interventions, rather than drugs, may be effective at slowing age-related cognitive decline or dementia from neurodegenerative diseases such as Alzheimer’s. “Maybe social interventions—changing how you deal with your surroundings—is something we can do today to help our brains stay younger,” Amdam said. “Since the proteins being researched in people are the same proteins bees have, these proteins may be able to spontaneously respond to specific social experiences.”