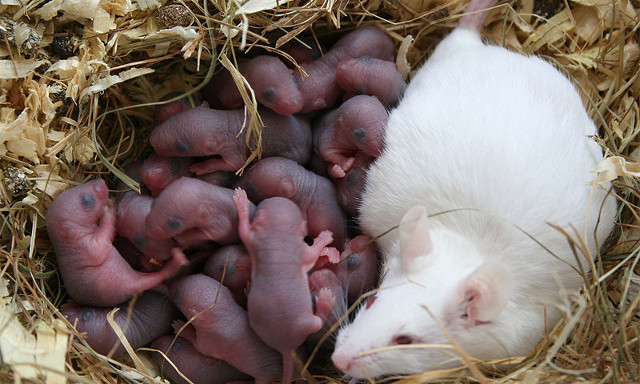 WIKIMEDIA, SEWERYN OLKOWICZPrevious research has shown that high doses of broad-spectrum antibiotics can affect the behavior of adult animals, and numerous epidemiological studies have begun to link early-life antibiotic use to diverse ailments in humans. A study published last week (April 4) in Nature Communications adds to this growing literature, demonstrating that even low, clinically relevant doses of the classic narrow-spectrum antibiotic penicillin can trigger changes in the gut microbiome, in the blood-brain barrier and brain chemistry, and in the behaviors of mice exposed at a young age. Treating the mice with Lactobacillus rhamnosus bacteria, however, helped protect the mice against the effects of early-life, low-dose penicillin exposure.

“There are almost no babies in North America that haven’t received a course of antibiotics in their first year of life,” McMaster University coauthor John Bienenstock, who is also the director of the Brain-Body Institute at St. Joseph’s Healthcare Hamilton,...

Bienenstock and colleagues gave pregnant female mice low doses of penicillin during their last week of gestation, and continued to treat their pups until they weaned a few weeks after birth. At six weeks old, mice exposed to the antibiotic were less social, slightly less anxious, and more aggressive than unexposed mice, the team reported. In the animals’ brains, the researchers found evidence of a thinned blood-brain barrier, as well as increased production of cytokines and heightened activity of a gene that has been linked to aggressive behavior. Treatment with L. rhamnosus could reduce these effects, however. “It had a definite effect in lessening most of the negative outcomes we observed, especially the imbalance of gut bacteria and behavioral changes,” Bienenstock told ResearchGate.

The results support the idea that one of the many ways a disrupted microbiome can affect the body is by changing the brain. The mechanisms of these effects remain unclear, however. “Researchers hypothesize that antibiotics and other disturbances in the microbial force could alter the brain and our behavior via chemical signals that sway the immune system, metabolism, and the brain itself,” Ars Technica UK reported.

Another point that needs further clarification how the effects depend on the timing of antibiotic administration. “We need to establish whether the same effects are seen if the antibiotic is administered only in pregnancy, or only to the pups after birth,” Bienenstock told ResearchGate. “The timing of the antibiotic late in pregnancy may be a crucial issue. This is a time when the fetus is undergoing rapid maturity of brain structure which may render it extremely sensitive to potentially noxious stimuli.”