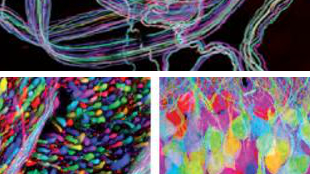 WIKIPEDIA, LICHTMAN AND SANES“It may be stupid to even consider doing this,” Harvard biologist Jeffrey Lichtman told colleagues today (December 8) at the American Society for Cell Biology (ASCB) meeting currently underway in Philadelphia. Not many scientists would begin their talks this way, but those were the words Lichtman chose to convey the imposing challenge of mapping every synaptic connection within the brain—he knows it won’t be easy.

Lichtman’s team is using Brainbow and connectomics approaches along with serial electron microscopy (EM) to visualize synaptic connectivity in the mouse brain. Given the organ’s complexities at nearly every level of organization, he said, tracking the cellular components of the brain poses unique challenges. For one, the brain is highly compartmentalized, so samples from different regions will likely yield neurons that perform different functions. Moreover, when examining even the smallest tissue samples, there is “a massive amount of communication going on” among...

Examining only subsets of these cells is still tricky, he added. While advanced EM and computational techniques produce terabytes upon terabytes of high-resolution data, “these images, although they’re fun to look at, are useless,” Lichtman said at ASCB. “Turning images into a database is very hard,” he added.

The team is applying an automated approach to transform segmented data into 3-D stacks of EM sections of brain tissue, producing what Lichtman called “saturated reconstructions.” So far, the group has mapped about one-billionth of the mouse brain, he estimated.

“We can see everything now, which is very exciting, but [there is] so much to do, so little time.”