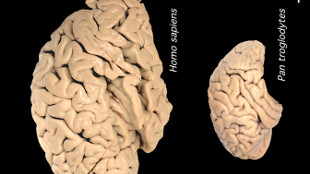 Mice carrying the human enhancer HARE5 had brains that developed more quickly and grew 12 percent larger than mice with a chimpanzee version of the DNA, scientists reported this week (February 19) in Current Biology.

A team of scientists from Duke University scanned the human genome for sequences known as “human accelerated regions” that differ between people and chimpanzees. One of the sequences they found was HARE5, an enhancer that regulates gene expression. To determine the functional differences between human and chimp HARE5, which only vary at 16 locations in over 1,200 bases of DNA, the researchers engineered two sets of mice, each with a reporter gene under the control of either the human or the chimp version of the enhancer. The reporter made cells in which HARE5 was activated turn blue.

Examining the mouse embryo, the researchers determined that...

“It shows that just having a few changes to our DNA can have a big impact on how the brain is built,” study coauthor Debra Silver told National Geographic’s Not Exactly Rocket Science. “It is probably one of many regions that explain why our brains are bigger than those of chimps.” The team next plans to study how the larger, more quickly developing brains influence mouse memory and social behavior, Silver told The Washington Post.