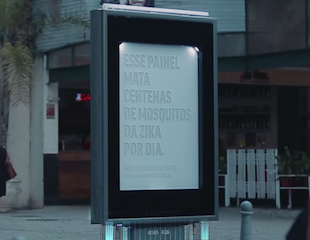 The Mosquito Killer BillboardNBSTwo companies in Brazil are taking a creative approach to controlling populations of Zika-carrying mosquitoes: creating billboards that mimic the smell of human breath and sweat to lure and kill the insects, BBC News reported. The “Mosquito Killer Billboards” aim to attract Aedes aegypti mosquitoes, the virus’s primary vector, by releasing puffs of carbon dioxide and lactic acid—found in human breath and sweat, respectively. Once the insects crawl inside, they become trapped and die, according to STAT News.

“The thing about this mosquito is that it’s a flying bioterrorist menace,” Edimilson Migowski, chief of infectious diseases at the Federal University of Rio de Janeiro, said in a video.

Two of the billboards have already been erected in Rio de Janeiro. The companies behind the initiative, Posterscope and NBS, have made the plans public to encourage others to build their own. They say the...

But one expert worries about placing the billboards in populated areas. “Maybe if it was not in a high-density place, where people are sitting perhaps with exposed legs,” Chris Jackson, a pest control expert at the University of Southampton, U.K., told the BBC. “Otherwise, you’re pulling in hungry mosquitoes and providing them with exposed human flesh.”