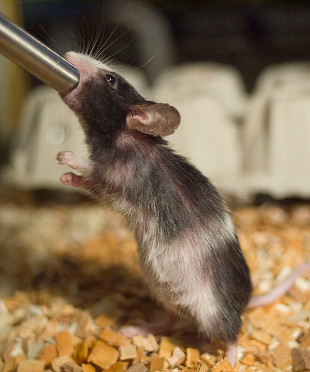 WIKIMEDIA, TIIA MONTOMice lacking a subunit of a G protein-gated inwardly rectifying potassium (GIRK) channel drank more ethanol than their wild-type counterparts when given access to the beverage for only two hours a day during a time when they would be most likely to drink—a test intended to mirror a bar’s happy hour. GIRK3 knockout mice did not drink to the point of intoxication when given continuous access to alcohol, however, suggesting this subunit specifically affects the tendency to binge drink, according to a study published this week (May 11) in PNAS.

“Alcohol hits a lot of different targets in our brain, which makes disentangling the in vivo effects of alcohol quite complicated,” coauthor Candice Contet, a biologist at the Scripps Research Institute in La Jolla, California, said in a statement. “Our study sheds light on the molecular mechanisms implicated in binge drinking.”

Further experimentation revealed that a dopaminergic reward pathway originating in the ventral tegmental area (VTA) of the brain was insensitive to ethanol consumption in the knockout mice. “Even when applied at a very high concentration, alcohol was unable to alter the firing of neurons missing GIRK3,” Scripps Research Associate Melissa Herman said in the statement. The mice lacking GIRK3 may have thus been driven to drink more to boost the activity of other reward pathways.

Notably, using a viral vector to reintroduce GIRK3 in the VTA of knockout mice rescued normal alcohol consumption behavior. And boosting expression of the protein in wild-type mice resulted in even less binge drinking. The researchers suggest that selectively targeting GIRK3-containing channels could one day help reduce alcohol consumption in people who binge drink.