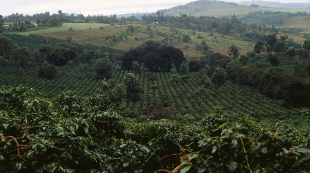 A coffee plantation in TanzaniaWIKIMEDIA, RJONES0856Some African coffee plantations have wild plants and animals to thank for bountiful harvests, according to new research. German scientists have found that bees, birds, and bats greatly impact both the quantity and quality of coffee harvests in Tanzanian plantations surrounding Mount Kilimanjaro.

Ingolf Steffan-Dewenter, a tropical ecologist at the University of Würzburg's Biocenter, and his colleagues studied coffee plants grown in traditional gardens, plantations planted with conventional shade-loving plants, and plantations with newer sun-tolerant, fungi-resistant strains of coffee plant. In all three cultivation systems, the team found that when birds and bats had access to coffee plants, those plants put out about 10 percent more coffee cherries, the fruits that harbor coffee beans. The researchers reported their results in Proceedings of the Royal Society B last week (February 5).

The team suggested that the birds and bats were benefitting the coffee harvest...

The study took place as many plantations in the area began transitioning to new sun-tolerant cultivars of coffee plant, which allow growers to plant fewer habitat-rich shade trees amongst coffee plants. The researchers credit the positive effects of increased biodiversity in all three cultivation systems, including the more intensive sun plantations, with the fact that the area is a patchwork of small plantations, native forests, and pastureland. “We put this down to the mosaic landscape structure on Mount Kilimanjaro with its gardens, forests and grasslands, Steffan-Dewenter’s doctoral student Alice Classen said in the statement.