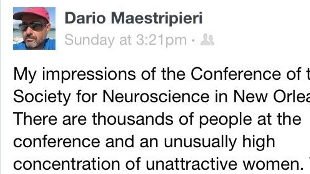 Maestripieri's ire-inducing Facebook postNeurobiologist Dario Maestripieri is catching major internet flack for an opinion he recently expressed on his personal Facebook page. In an entry he posted this past Sunday (October 14), the University of Chicago researcher and fellow of the American Association for the Advancement of Science lamented what he perceived as a lack of "beautiful women" the Society for Neuroscience's annual conference in New Orleans, Louisiana. "There are thousands of people at the conference and an unusually high concentration of unattractive women," Maestripieri wrote. "The super model types are completely absent. What is going on? Are unattractive women particularly attracted to neuroscience? Are beautiful women particularly uninterested in the brain?"

Academic bloggers wasted no time in condemning Maestripieri's post. "There is a very simple response here. Don't do this," wrote DrugMonkey. "It's sexist, juvenile, offensive and stupid. We should not tolerate this crap."

Maestripieri appears to have a habit of judging the looks of those around him. In March, he published a blog on Psychology Today's website entitled "The truth about why beautiful people are more successful," in which he discussed informal surveys he conducts on the attractiveness of fellow airline passengers flying in first/business (F/B) class or economy (E). "A few times, as I boarded a plane and walked to reach my seat in the last row I mentally assigned an attractiveness score, from 1 to 10, to the people sitting in F/B class and calculated an average," Maestripieri wrote. "Then I did the same for some random people sitting in the middle of the E class. Every time I did this, the average score for the people in the F/B class turned out to be higher than the average score for the people in the E class." He then cites research that supports the idea that more attractive people have easier rows to hoe: making an average of 3-4 percent more, getting hired sooner, and being promoted more quickly than people with below-average looks.

"[Maestripieri is] well aware of how hard someone in his position has had to work in order to rise to the top of an extremely competitive and demanding field," wrote Erin Gloria Ryan on Jezebel. "So it's confusing to me that he would fail to grasp the fact that women in his field had to perform similar work and exhibit similar levels of dedication that he did."

Maestripieri closed the Facebook post that is drawing the collective ire of the internet with a simple, yet apparently ineffective statement: "No offense to anyone."