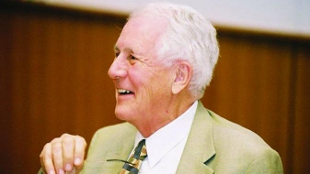 WIKIMEDIA, NIH, TINSLEY DAVISJ. Woodland “Woody” Hastings, whose work on the luminescent marine bacterium Vibrio fischeri led to the characterization of quorum sensing, died last week (August 6) in his home in Lexington, Massachusetts. The cause was pulmonary fibrosis, according to his family; he was 87.

When Hastings and his colleague Kenneth Nealson first uncovered evidence in the late 1960s that V. fischeri could communicate with one another, only producing the bioluminescence once their population reached certain concentrations, the scientific community was skeptical. In fact, quorum sensing, as it came to be known, was not accepted until nearly 20 years later, when researchers identified the molecule that allowed the bacteria to sense the concentration of their community. And it was another decade before quorum sensing was recognized as a widespread bacterial phenomenon.

“One of Woody’s great fortes was coming up with concepts,” Nealson, an environmental science professor at the...

Hastings began his work on bioluminescence as a graduate student at Princeton University, where he worked with E. Newton Harvey. Then, as a postdoc at Johns Hopkins University, he studied the glow of fireflies. Later, as a professor at Northwestern University, he moved on to the dinoflagellate Gonyaulax polyedra, discovering that the luminescence of the plankton, which flashes at night, cycles based on the organism’s internal circadian clock. His work paved the way for the discovery of circadian rhythms in nearly all living things. “Working on topics such as bioluminescence or circadian rhythms could only be motivated by a true interest in basic knowledge,” Hastings said during a lecture he gave in 2000.

During his career, Hastings also held positions at the University of Illinois at Urbana-Champaign, Marine Biological Laboratory at Woods Hole, and Harvard, where he worked from 1966 until his retirement five years ago. He was a member of the National Academy of Sciences.

Hastings’s wife died in 2009. He is survived by his companion, four children, and five grandchildren.