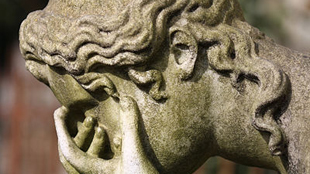 People who have suicidal ideations do not always seek psychiatric help or discuss these thoughts with friends or loved ones. Therefore, the development of a simple blood test to predict when an individual has a higher risk for self-harm has been a long-term goal of the medical community. Now, a team of researchers at Indiana University in Indianapolis has found a handful of molecular indicators that can increase the accuracy of predictions of future suicide-related hospitalizations. The team reported its findings today (August 20) in Molecular Psychiatry.

The team used a four-part approach to search for biomarkers related to suicidal behaviors. They first identified nine men with bipolar disorder who went from having no suicidal thoughts to later scoring high on a test for suicide risk. Blood tests on the men revealed 41 potential molecular markers that may have been involved in the increase in suicidal...

Next, the nominal markers were compared to those detected in blood samples from nine bipolar men who had recently committed suicide, narrowing the list down to 13 potential markers. Additional statistical tests left the team with six biomarkers to test. Levels of four of those six were elevated in 42 men with bipolar disorder and 46 men with schizophrenia who had been hospitalized for suicide attempts. In a long-term study, those four markers, along with clinical measures of mood and mental state, boosted the accuracy of predictions about future hospitalizations from 65 percent to more than 80 percent. The strongest predictor of suicidal ideation was a protein encoded by the gene SAT1, whose expression was previously found to be increased in response to exposure to toxins, infection, and lack of oxygen.

Ghanshyam Pandey, a psychiatrist at the University of Illinois at Chicago, told Nature that Niculescu’s work is important, but the results must be validated in much larger study before a biomarker test is ready for the clinic. “That’s a big challenge,” Pandey told Nature.