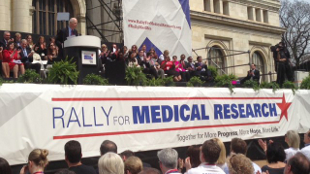 Hordes of scientists made their way across the road from the Washington Convention Center, where National Cancer Institute Director Harold Varmus had just concluded his talk on the agency’s current strategies in the fight against cancer, to the public square around the Carnegie Library. There, dozens of speakers—including scientists, politicians, and patient advocates—took to the stage to address the sun-soaked crowds.

Lamenting the 5 percent cut to the NIH’s $31 billion annual budget imposed by Congress last month through sequestration, AACR CEO Margaret Foti declared that “the continued erosion of funding for the most important medical research institute in the world, the National...

And Representative Rosa DeLauro (D-Conn), herself an ovarian cancer survivor, drew huge cheers from the crowd when she proclaimed, “Lifesaving cancer research is being cut because of ideology, and that’s wrong. Don’t take ‘no’ for an answer when you go up to Capitol Hill. Tell them to cut the oil and gas subsidies and the tax breaks that send our jobs overseas, but not the biomedical research that saves our lives.”

Rockefeller University President Mark Tessier-Lavigne described some of the advances made over the past decade thanks to government-funded research, but added that the huge challenges remaining can only be overcome if scientists are properly funded. “The only way to contain the human and economic impact of these diseases is through sustained investment in science,” he said. Tessier-Lavigne also pointed out that the rising costs of care for diseases like cancer, diabetes, and Alzheimer’s will outstrip the investment required for scientists to generate new treatments and potential cures.

Finally, noting that the NIH has lost 20 percent of its spending power over the past decade, resulting in a all-time record low for grant approval rates, Tessier-Lavigne raised concerns that limited resources will dissuade the next generation of scientists from entering the field—and could have a disastrous effect on research. “Make no mistake, it is possible to ruin our scientific community,” he said. “If we continue on this path, we will kill the goose that laid the golden egg.”