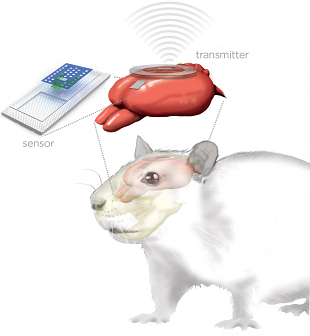 Artist’s rendering of the sensor implanted into a rat’s brain.UNIVERSITY OF ILLINOIS, JULIE MCMAHONResearchers in the U.S. and Korea have created tiny bioresorbing brain implants that are naturally degraded by the body after a few weeks of functioning, eliminating the need for retrieval, according to a paper published earlier this week (January 18) in Nature.

“This is a new class of electronic biomedical implants,” said coauthor John Rogers of the University of Illinois in a press release. “These kinds of systems have potential across a range of clinical practices, where therapeutic or monitoring devices are implanted or ingested.”

While current electronic implants used to monitor or treat medical conditions inside a patient’s body can cause inflammation or infection, the new silicon-based device is made entirely of inexpensive, biodegradable materials designed to be dissolved in the body after the sensor’s job is done.

“The ultimate strategy is...

Experimental implantation of the sensors in the brains of rats showed a measurement precision that was “just as good as that of conventional devices,” said Rogers, adding that “in the near future, we believe it will be possible to embed therapeutic function, such as electrical stimulation or drug delivery, into the same systems while retaining the essential bioresorbable character.”

According to the press release, the researchers are now working toward trialing the technology in humans and extending the device’s function to other clinical contexts.