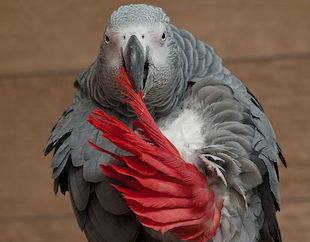 African grey parrotWIKIMEDIA, PAPOOGAA team of researchers dissected the brains of 28 bird species, finding that the animals have more neurons packed into their pallial telencephalons—a brain region involved in high-level learning—than do mammals with brains of similar mass. Parrots have between 227 million and 3.14 billion such neurons, while songbirds have between 136 million and 2.17 billion, according to the study published yesterday (June 13) in PNAS. By mass, that amounts to twice as many neurons as found in monkey brains, and four times as many as in rodent brains.

“This pretty much answers the question we began with: How can these birds be so clever with such small brains?” study coauthor Pavel Nemec of Charles University in Prague told The Guardian. “The answer is that there are so many neurons, their computing power is comparable to that of primates.”

To count the brain cells...

The bird neurons were much smaller and more densely packed than those in mammalian brains. This may allow the birds to be lighter for flight, the researchers wrote in their paper.

“These new findings could definitely help to explain why some birds, such as jays, crows and ravens, excel in their cognitive skills,” Andreas Nieder of the University of Tübingen in Germany, who was not involved in the work, told The Guardian. 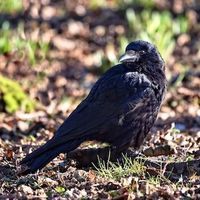