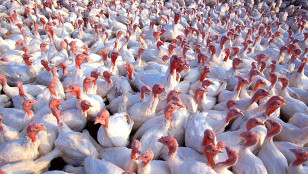 USDA AGRICULTURAL RESEARCH SERVICE, SCOTT BAUERGovernment officials have quarantined a California turkey farm after confirming the first case of H5N8 avian influenza in the Pacific Northwest, Reuters reported this week (January 26). Foster Farms alerted the US Department of Agriculture (USDA) after experiencing an increase in bird deaths and detecting H5N8 during routine testing, the firm said in a statement. According to the USDA, “H5N8 did not pose a health risk to the public, and birds from the involved flock would not enter the food system,” Reuters reported.

Meanwhile, a woman who recently returned to Canada from China is the first North American person known to have contracted H7N9 bird flu, Reuters reported. The patient is now recovering in isolation, according to the Public Health Agency of Canada.

“All evidence is indicating that it is likely the individual was infected following exposure in China,” Gregory Taylor, Canada’s Chief...

“I want to emphasize that the risk to Canadians is very low because there is no evidence of sustained human-to-human transmission of H7N9,” added Taylor.