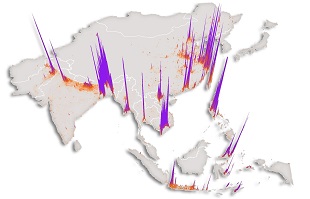 NATURE PRESS, GILBERT ET ALRegions in Vietnam, India, Bangladesh, Indonesia, and the Philippines could support spread of the H7N9 strain of influenza in bird populations if the virus were to leave China, where it first appeared, according to a study published this week (June 17) in Nature Communications. An international team analyzed conditions at nearly 9,000 poultry markets in China to predict likely risks at poultry markets across Asia.

“H7N9 is confined to China at the moment and all the neighboring countries are worried about when their chicken industry might be infected,” coauthor Simon Hay from the University of Oxford told BBC News.

First identified in March 2013 in China, 433 people have been infected with H7N9. Sixty-two have died. Because infected poultry are asymptomatic, it can be difficult to track the disease unless humans become ill.

“We don’t know where it will be introduced next,” coauthor...

Coauthor Tim Robinson told the BBC that the maps can be used to target surveillance efforts. Regions with a high density of live-poultry markets are at highest risk for the virus becoming endemic among birds and eventually spreading to people, especially within urban areas. Other risks include nearby open water and rice paddies and large populations of domestic ducks and chickens.