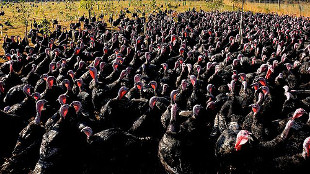 From January 19 to February 25, nine Chinese provinces saw 59 new laboratory-confirmed cases of human patients infected with avian influenza A(H7N9), which can cause severe pneumonia, the Chinese National Health and Family Planning Commission told the World Health Organization (WHO) this week (March 9). Part of the second wave of an outbreak that began in 2013, 49 of the newly reported cases occurred in people who had been exposed to live poultry or markets where live birds are sold. The majority of cases occurred in Guangdong province. Seventeen cases were fatal.

To combat the disease, the Chinese government has announced efforts to strengthen monitoring and treatment as well as other disease-controlling measures such as closing live poultry markets in the areas where outbreaks have occurred, and disinfecting others. The WHO suggests avoiding poultry farms, live bird markets, or areas where fowl are slaughtered, but does not...

By contrast, a study published this week (March 11) in Nature suggested that the outbreak could develop into a pandemic. “This virus is more dangerous,” study coauthor Yi Guan University of Hong Kong told The Washington Post. As of September 2014, 318 people had been infected and 100 had died. The virus has spread throughout Asia and into Canada.

Meanwhile, new strains of avian flu that are highly infectious among birds but not transmissible to people have been found on commercial turkey farms in many US states. An initial outbreak of H5N8 detected in a Californian turkey flock in January has mixed with North American avian flu strains to generate two new strains, including H5N2, which has been detected along the Pacific bird migration route in Washington, Idaho, and Oregon, and a new H5N1 that is different from the earlier deadly strain. Last week (March 4), the US Department of Agriculture announced that H5N2 had been detected in Minnesota, the first instance of the disease in the Mississippi bird migration route. The virus has spread this week to commercial turkey farms in Missouri (March 10) and Arkansas (March 11), including to suppliers of Butterball turkeys, The Wall Street Journal reported.