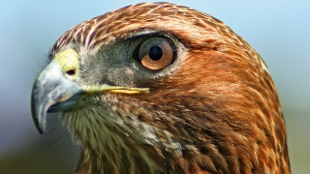 A red-tailed hawk, one of which brought down a US military helicopter in 2011, killing its two-man crewWIKIMEDIA, SCOT CAMPBELLUS Military helicopters have suffered more than 2,500 wildlife strikes, in which bats or birds collide with aircraft, from 1979 to 2011, according to a new analysis. Combing through US Army, Navy, Coast Guard, and Air Force records, a team of researchers led by research biologist Brian Washburn of the US Department of Agriculture National Wildlife Research Center in Sandusky, Ohio, found that more than 41 percent of those strikes occurred during autumn, while the frequency of midair collisions with wildlife was lowest in winter months. Washburn’s team, which published its results in Wildlife Society Bulletin last Sunday (February 23), also noted that the incidents cost from $12,184 to $337,281 each, depending on the severity of the damage to the aircraft. In at least one strike, the cost was...

“Findings from this research are being used by the US Department of Defense to increase the awareness of this issue, mitigate the problem, and increase the safety of pilots and aircrews,” Washburn said in a statement.

Birdstrike is also a big problem for commercial and private aircraft, with midair collisions between wildlife and aircraft costing up to $400 million annually in the U.S. and claiming 200 lives worldwide since 1988.