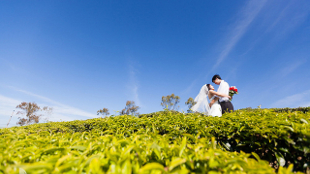 FLICKR, TONY NGUYENWhen it comes to personalities, the old adage “opposites attract” may still hold true, but at the level of DNA, people tend to flock toward similarity, according to a study published Monday (May 19) in PNAS. In a genetic survey of 825 married couples, researchers found that spouses shared more similar DNA than randomly chosen pairs.

“We do know in some sense that people prefer genetically similar spouses because we know that people tend to date and marry within their own racial and ethnic groups,” lead researcher Benjamin Domingue of the University of Colorado’s Institute of Behavioral Science told Reuters­. “We worked really hard in this study to not just replicate that fact. We eliminated racial variability and tried to control for ethnic variability. And we still find a preference for genetically similar individuals.”

How people assess and choose mates of similar genetic makeup remains unclear, Domingue noted, but it likely involves a diverse array of physical and mental preferences. “For example, people clearly care about height in picking partners,” he told Reuters. “To the extent that tall people marry other tall people, that is going to result in genetic similarity among spouses. But it is difficult to know whether height or genes is driving this decision.”