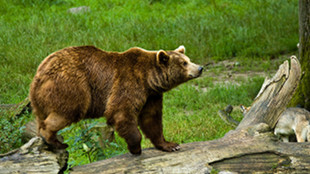 FLICKR, HENNING LEWEKE, SKY#WALKERA birdwatching trip turned violent on Sunday (April 28) when a brown bear attacked a family in Alaska’s Kenai Peninsula, the Peninsula Clarion reported. Toby Burke, a 48-year old biologist who works at the Kenai National Wildlife Refuge, fought the bear with a spotting scope mounted on a 6-foot-tall tripod and suffered only minor bruises, while his wife and three children were unharmed.

“When the bear was headed towards us, we were like, ‘OK, it’s do or die now,’” Burke told ABC News.

He and his family had spied the animal through the spotting scope when it was about a quarter of a mile away but subsequently lost track of it among the dunes. Then Burke’s 11-year-old daughter noticed it coming up behind the family.

They gathered together and made loud noises, but the bear was undeterred and began to run toward them. “At that...

Burke stood in front of his 11-year-old daughter, his 8-year-old son, and his wife, who was carrying their 7-month-old infant, shielding them from the bear. Holding onto the tripod, he jabbed the spotting scope into the bear’s mouth, but the bear broke it. He then tried to stab the bear in the face with the tripod and remains of the scope, but the bear knocked it out of his hands and bit into his arm, which was protected by thick clothing. Burke punched the bear in the face and the bear hit him back in the ribs before backing away.

Burke said that the encounter probably lasted a minute or less. Shaken, the family called the authorities saying they were worried the bear would harm other people they had seen in the area. Troopers came to the scene, and after the bear charged at them, they shot and killed it.

From the worn-down pattern of her teeth, the bear appears to have been 10 years old. She was not lactating. Earlier that day, she had attacked a fisherman’s truck, as well as a telephone pole, according to the troopers. Jeff Selinger, a biologist with the Department of Fish and Game told the Anchorage Daily News that the bear’s behavior was very unusual for the species.

“The way it was acting leads us to believe that it was probably just really hungry and trying to find something to eat,” Megan Peters, spokesperson for the Alaska State Troopers, told the Peninsula Clarion.

The 7-month-old infant reportedly slept through the entire encounter.