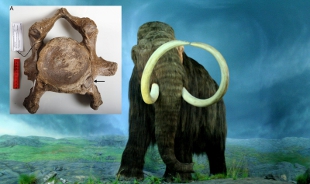 Is the presence of cervical ribs (arrow, inset) a clue to mammoth extinction?INSET FROM PEERJ PAPER - DOI: 10.7717/peerj.318/fig-1, WIKIMEDIA, FLICKR - TRACY OThe last remaining populations of wooly mammoths roaming the Earth as their species spiraled toward extinction about 10,000 years ago was beset with birth defects, perhaps the result of inbreeding or increased levels of prenatal stress caused by starvation or disease, according to a new study published in PeerJ yesterday (March 25). Dutch and Belgian researchers reported finding several fossil vertebrae near the North Sea in Europe that showed signs of cervical ribs, birth defects that can be a sign of widespread and serious developmental disturbances. “We knew these were just about the last mammoths living there, so we suspected something was happening,” study leader Jelle Reumer of Utrecht University in the Netherlands told LiveScience. “Our work now shows that there was indeed...

Those so-called “neck ribs” were likely the result of inbreeding between shrunken populations of the imperiled creatures, of maternal stress brought on by dwindling resources or disease, or both, the scientists suggested. “Cervical ribs indicate there has been a disturbance of early pregnancy,” coauthor Frietson Galis, a paleontologist at the Naturalis Biodiversity Center in Leiden, the Netherlands, told Science.

Of the nine mammoth vertebrae that Reumer and his colleagues were able to analyze, the researchers found evidence of cervical ribs in three. The team also analyzed 28 elephant vertebrae from museums. Only one of those speciments showed evidence of a cervical rib. “This seemed [to be] an extremely high incidence,” Reumer told Science.

Researchers have long debated which factors—overhunting by humans, habitat shrinkage, or climate change-driven resource limitations—led to the extinction of wooly mammoths and other Ice-Age megafauna. The suggestion that birth defects caused by inbreeding, malnutrition, or disease contributed to the mammoth’s downfall could serve as another piece of this, as yet, unresolved puzzle.