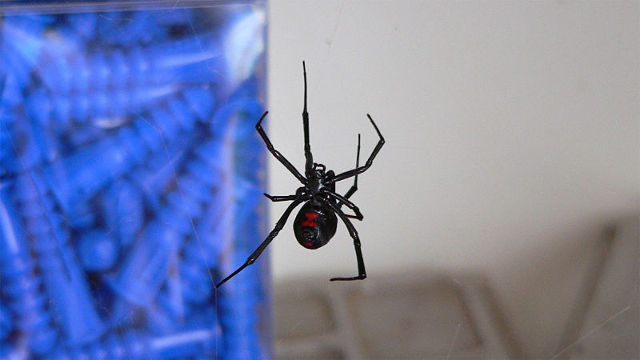 WIKIMEDIA, KEN THOMASInterrogating the genome of the WO phage, a widespread bacteria-infecting virus, researchers at Vanderbilt University in Nashville, Tennessee, have unveiled a few surprises, including sequences that relate to the black widow’s spiders deadly latrotoxin.

“Discovering DNA related to the black widow spider toxin gene came as a total surprise because it is the first time that a phage . . . has been found carrying animal-like DNA,” Vanderbilt University’s Seth Bordenstein, who published the results with his wife and coauthor Sarah Bordenstein this week (October 11) in Nature Communications, said in a press release. The duo also found that bits of WO DNA shared sequence similarity with other animal genomes, including a gene involved in sensing pathogens and triggering cell death, as well as immune-evasion genes. “These sequences are more typical of eukaryotic viruses, not phages,” Seth Bordenstein said.

“It’s the first report of a virus infecting...

Among the bacteria that the WO phage infects is Wolbachia, a bacterium that is commonly found infecting insects, spiders, and other animals, meaning that any phage that infects Wolbachia is also likely to be living inside a eukaryote. When it comes time for the virus’s progeny to burst from the Wolbachia cell, the viruses will also have to escape the eukaryotic cell hosting the Wolbachia, and must thus evade the animal’s immune system when it does so.

To better understand how WO does this, the Bordensteins sequenced its genome. In total, they found that eukaryotic genes made up nearly 50 percent of WO’s DNA. “For a phage to devote about half its genome to these eukaryotic-like genes, they must be important to the phage function,” Sarah Bordenstein told New Scientist.

In addition, WO appears to have taken its animal-derived genes and combined or reconfigured them. “Viruses do this,” Sarah Bordenstein told The Atlantic. “It’s like a buffet. They take bits from different genes and put them together to form this super gene.” WO’s weird genetics may serve the virus as bursts free from its host within a host, she added. “Once it gets out, it needs some way of cloaking itself, or counterattacking, or evading animal defenses.”

Correction (October 12): This story has been updated to make clear that the WO phage infects Wolbachia, which infect arthropods and other eukaryotes. The Scientist regrets the error.