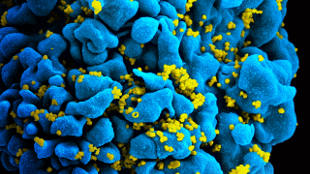 WIKIMEDIA, NIAIDWhile researchers around the world continue to search for antibodies that effectively neutralize HIV, a team led by investigators at the Scripps Research Institute in Jupiter, Florida, has found that building a molecule from scratch—based on an intimate knowledge of HIV pathology—can block infection, according to a study published this week (February 18) in Nature. The synthetic antibody, called eCD4-Ig, mimics both CD4 and CCR5, the two T-cell surface receptors bound by HIV, binding the virus and flagging it for destruction.

The eCD4-Ig construct effectively blocked infection in vitro—better than all known HIV antibodies—and transfecting a gene for the synthetic molecule into four monkeys protected the animals from simian HIV despite being dosed with successively higher doses of the virus for nearly eight months.

“It is absolutely 100-percent effective,” lead author Michael Farzan, a viral immunologist at Scripps, told The Wall Street Journal. “There is...

“I am a huge fan of this paper,” Oregon Health & Science University’s Nancy Haigwood, who wrote an accompanying Nature editorial, told Science. “It’s really very creative and a breakthrough as far as I am concerned.”