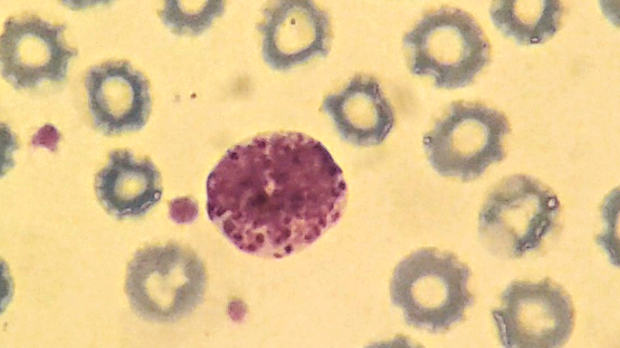 Blood cells, like this basophil and the erythrocytes that surround it, may develop from stem cells in a much simper progression than previously suspected.WIKIMEDIA, HANNA SORENSSONSince 1961, when biologists James Till and Ernest McCulloch discovered the first blood stem cell, researchers have thought that the various mature blood cell types developed from hematopoietic stem cells after a long process of several intermediate steps. But a new study, published last week (November 5) in Science, suggests that the process is much less involved.

“The whole classic ‘textbook’ view we thought we knew doesn't actually even exist,” John Dick, coauthor of the study and a geneticist at the University of Toronto, said in a statement. “Instead, through a series of experiments we have been able to finally resolve how different kinds of blood cells form quickly from the stem cell—the most potent blood cell in the system—and not...

Dick and colleagues also discovered that blood cell maturation differs between early development and adulthood, a model that also runs contrary to the previous conception of the process.

“If this work is replicated by other groups, we rewrite the textbooks,” Larry Goldstein, a University of California, San Diego, stem cell researcher who was not involved with the study, told The San Diego Union-Tribune. “First, there’s this very major shift in how blood cells are built from the fetus to the adult, and second, the adult lineage relationships are completely different than what we thought.”

Dick and his colleagues studied about 3,000 human blood cells derived from people of different ages, including umbilical cord blood from infants. They noted that most of the progenitor cells were unipotent and not multipotent as previous models held.

The new findings could be a significant boon to the treatment of blood-related maladies as well as regenerative strategies that aim to use stem cells from patients to develop mature cell populations to introduce back into ailing systems.