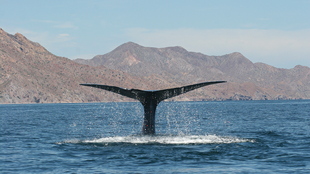 A blue whale fluking in the Gulf of CaliforniaDIANE GENDRONIn humans, skin pigmentation protects DNA from UV damage. Blue whales react to the sun’s rays similarly, darkening their skin when UV radiation is intense, according to a study published last week (August 30) in Scientific Reports.

“Whales can be thought of as the UV barometers of the sea,” said Mark Birch-Machin, a professor of molecular dermatology at Newcastle University and a coauthor of the paper, in a press release. “It’s important that we study them as they are some of the longest living sea creatures and are sensitive to changes in their environment so they reflect the health of the ocean.”

To test whales’ responses to UV radiation, researchers sampled skin from blue whales, sperm whales, and fin whales in the Gulf of Mexico between 2007 and 2009. They found that melanin appeared to protect against...

Sperm whales, meanwhile, produced more stress-associated genes to repair DNA damage when exposed to intense UV radiation. Fin whales, which have the darkest skin of the three, did not show variation in skin color nor gene expression, but suffered the least sun damage of all the whales anyhow.

The researchers told The Canadian Press that their next step is to establish whether damage from UV radiation leads to skin cancer in whales.