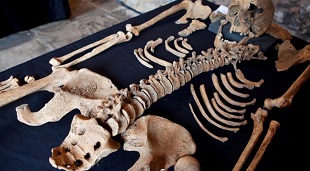 CROSSRAIL LTDTwenty-five skeletons uncovered in London last year appear to have been part of a larger burial ground for plague victims. DNA sequenced from teeth pulled from the remains confirmed the presence of Yersinia pestis, the bacteria that causes both bubonic and pneumonic plague. The skeletons were found when tunnels were being dug for London’s new Crossrail train line. Before the discovery, it was unclear where the city’s plague victims had been buried.

“This discovery is a hugely important step forward in documenting and understanding Europe’s most devastating pandemic,” he added. “Until Crossrail’s discovery, archaeologists had been unable to confirm the story,” Jay Carver, Crossrail’s lead archaeologist, said in a statement.

The Black Death peaked in Europe between 1348 and 1350, wiping out about 60 percent of London’s population. According to genome analysis comparing the ancient sample and a recent outbreak in Madacascar, the ancient strain may...

This latest finding could help researchers understand the evolution of plague bacteria and “is useful information that could warn and avert potential epidemics and pandemics," Brendan Wren of the London School of Hygiene and Tropical Medicine told the Associated Press.

Tim Brooks of Public Health England told The Guardian that the Black Death was a pneumonic version of the disease—an airborne infection of the lungs, spread via coughing and sneezing—instead of bubonic—an infection that enters through the skin, infects the lymph system and is spread by rat fleas.