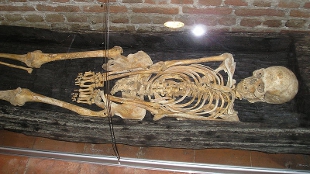 The bones of two 9,000-year-old skeletons will remain above ground for at least a little while longer, thanks to a United States district court judge who signed an injunction this week (May 7) to extend a temporary restraining order keeping the bones in the custody of University of California, San Diego, officials until a case over the bones is settled, ScienceInsider reported.

For the past 6 years, since their discovery in 2006 during excavation of the UCSD chancellor’s home, the skeletons have been the center of a legal battle. The Kumeyaay Indians of San Diego want to rebury the bones, which they believe were unearthed from ancestral tribal lands, and filed a lawsuit this April to reclaim them. But three UCSC professors fought back, filing another lawsuit later that month to keep the skeletons available for study. The hope...

The professors claim there is no evidence that the skeletons are of Kumeyaay origin. For one, the Kumeyaay likely moved into the area a mere 2,000 years ago, according to a scientific advisory committee to UCSD. Additionally, the Indians traditionally cremated their dead.

A federal court in San Francisco is scheduled to hold a hearing for the case tomorrow (May 11).