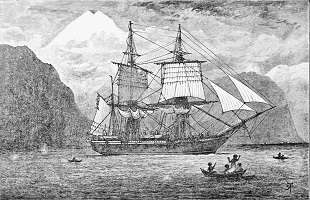 WIKIPEDIA, POPULAR SCIENCE VOL.57On the voyage of the HMS Beagle, Darwin lived and worked in a cabin that housed the ship’s library—404 volumes that spanned works by naturalists and explorers of the time. Now, a virtual recreation of the library, published online this week, gives readers a glimpse of the evolutionary biologist’s life at sea, where he came up with his theory of natural selection.

The reconstruction, led by science historian John van Wyhe of the National University of Singapore, catalogs more than 195,000 pages of text and 5,000 illustrations. The project began in 2006 when van Wyhe was editing Darwin’s Beagle notebooks, and struggled with Google searches to identify words and terms, he told Nature News. The digitized, transcribed volumes are intended to make such searches simpler.

The library “provides an unprecedented insight into the journey that changed science and our understanding of the world,”...

Although most of the tomes are nonfiction, the few works of fiction present included Milton’s Paradise Lost, and a Spanish novel that Darwin is known to have read on the voyage, “a sort of quasi-political, quasi-sexy, account of the adultery case against [Queen] Caroline,” van Wyhe told The Guardian.

The library also clarifies some obscure notes Darwin made, such as the phrase “Ellis horse story,” written while he was visiting Tahiti. The phrase, it turned out, referred to a book by the missionary William Ellis, which described the first horse that arrived on the island in 1817.

Although many of these books are already widely used by researchers, digitization makes the collection more accessible to general readers. “I see this not as a project that’s finished but as a beginning,” van Wyhe told Nature News. “People can now really start doing interesting things with this library.”