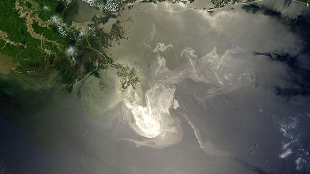 Sunlight illuminates the lingering oil slick off the Mississippi Delta on May 24, 2010.WIKIMEDIA, NASA/GSFC, MODIS RAPID RESPONSEIn a liability trial for the 2010 oil spill that killed 11 men and released some 4 million barrels of oil the Gulf of Mexico, a senior BP executive Lamar McKay argues that his company was not the only guilty party in the disaster; Transocean, which owned and operated ran the Deepwater Horizon rig, and contractor Halliburton, which provided the cement used to seal the Macondo well, are also partly responsible.

“I think that's a shared responsibility, to manage the safety and the risk,”' McKay told the court, according to BBC News. “Sometimes contractors manage that risk. Sometimes we do. Most of the time it’s a team effort.”

Robert Bea, an engineering professor at the University of California, Berkeley, and a former BP safety expert, testified on the US Department...

BP paid $4.5 billion in 2012 to settle criminal charges and $7.8 billion to affected families and businesses, and now faces additional fines—up to $17.6 billion—pending the outcome of the ongoing trial in New Orleans, which aims to identify the cause of the spill, assign blame, and calculate how much oil was actually leaked. “It is expected to be one of the biggest and costliest trials in decades,” the BBC reported.