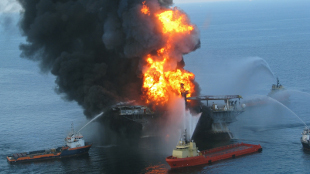 Wikimedia, US Coast GuardMore than 2 years after the BP Deepwater Horizon oilrig exploded, killing 11 rig workers and releasing nearly 5 million barrels of oil into the Gulf of Mexico, BP pled guilty to felony charges this week (November 15) and agreed to pay the federal government $4.5 billion in penalties, including $350 million to the National Academy of Science (NAS). Promptly following the settlement—the largest in US history—the Department of Justice announced that it has charged the NAS to use the money to research and protect the devastated environments across the Gulf Coast region.

“[The NAS program] will seek to advance scientific and technical understanding to enhance the protection of human health and environmental resources in the Gulf Coast region including issues concerning the safety of offshore oil drilling and hydrocarbon production, and transportation in the Gulf of Mexico and on the United States' outer continental shelf,” NAS President Ralph J....

BP agreed to pay the $350 million over the next 5 years, and the NAS will spend it over the next 30, funding researchers of its choosing from the NAS, the National Academy of Engineering, the Institute of Medicine, and the National Research Council. “BP will have no involvement in any decisions related to the NAS program,” Cicerone said in the statement.

BP also pled guilty to criminal misdemeanors under the Clean Water Act and the Migratory Bird Treaty Act, for which it will also pay $2.394 billion to the National Fish & Wildlife Foundation in the next 5 years.