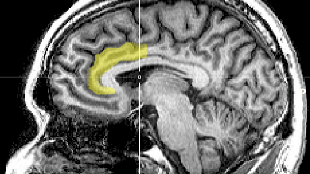 WIKIMEDIA, GEOFF B HALLPrisoners with relatively low activity in a particular brain region while performing a computer-based decision-making task are more likely to be arrested again on release than those with higher activity in that brain region during the task, according to a study published this week (March 25) in the Proceedings of the National Academy of Sciences.

A team of neuroscientists led by Eyal Aharoni at the University of New Mexico in Albuquerque used functional magnetic resonance imaging (fMRI) to scan the brains of 96 soon-to-be-released male prisoners. The scans focussed on the anterior cingulate cortex (ACC), an area of the brain associated with decision-making and motor control, as the prisoners completed challenges on a computer that required them to inhibit impulsive reactions as they made quick-fire decisions.

The researchers then monitored the fate of the released prisoners over the next 4 years, and found that subjects...

The results raise the possibility that activity in brain regions like the ACC in response to experimental tasks could be used in addition to existing behavioral risk factors to predict the likelihood a prisoner will re-offend. It also suggests that interventions in that modulate ACC activity might increase cognitive control and reduce recidivism.

But the authors urged caution, arguing that the results must be replicated in more robust experiments to establish reliability. Even then, they added, it would be inappropriate to use the fMRI information to make decisions about sentencing or parole.